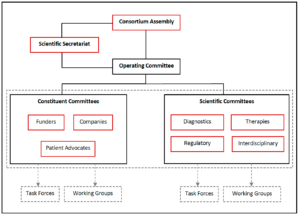 IRDiRC is governed through a Consortium Assembly, an Operating Committee, three Constituent Committees and four Scientific Committees, aided by ad hoc Task Forces and Working Groups. The Scientific Secretariat provides organizational and communications support. The composition of these bodies are described below.

The Task Forces and Working Groups are created to tackle specific topics within rare diseases research proposed by the Constituent and/or Scientific Committees and selected as prioritized actions by the Consortium Assembly and the Operating Committee. Each Task Force and Working Group reviews current barriers to efficient and effective rare disease research, and proposes solutions through policy recommendations and/or technical applications including platforms, tools, standards and guidelines. Members of the Task Forces and Working Groups are nominated based on their expertise in the selected area and include key players of diverse backgrounds to ensure different perspectives are taken into consideration to drive innovation and new approaches. The Task Forces and Working Groups may operate, on a time-limited mandate, either solely as IRDiRC initiatives or jointly with other external organisations that wish to collaborate and address similar issues.

The Scientific Secretariat provides relevant day-to-day actions aimed at assuring the correct organization and management of the IRDiRC Consortium and its members.  In details, the Scientific Secretariat (i) supports the work of IRDiRC Committees, Task Forces, and Working Groups, (ii) organizes and coordinates meetings, teleconferences, and events, (iii) develops and provides all required documents, (iv) facilitates the coordination and collaboration intra-consortium and with relevant external organizations and initiatives, (v) provides secretariat support and (vi) engages in communication and dissemination activities.

Office of the IRDiRC Chair